The Toronto Star – The Residences of 488 University Avenue

INSPIRED BY THE WORLD'S GREAT BOULEVARDS 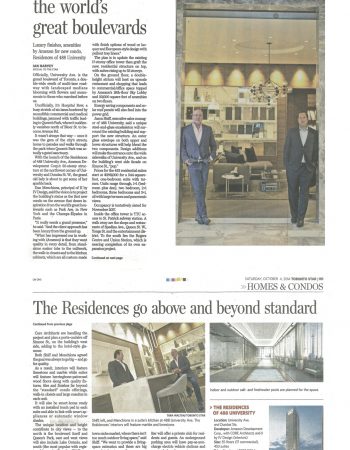 It wasn’t always that way – once it was the gem of the city’s streets, home to parades and walks through the park when Queen’s Park was actually a gated sanctuary.
With the launch of the Residences of 488 University Ave., Amexon Development Corp.’s 55-storey structure at the northwest corner of University and Dundas St. W., the grand old lady is about to get some of her sparkle back.

Dan Menchions, principal of II BY IV DESIGN, said the vision is to project the building’s status as the first new condo on the avenue that draws inspiration from the world’s great boutique boulevards such as Park Ave. in New York and the Champs-Élysées in Paris.

“It really needs a grand presence,” he said. “And the client approach has been luxury from the ground up. “What has impressed me in working with (Amexon) is that they want quality in every detail, from standalone soaker tubs to the millwork, the walk-in closets and to the kitchen cabinets, which are all custom-made with finish options of wood or lacquer and European-style design with pullout tray liners.”

The plan is to update the existing 17-storey office tower then graft the new, residential structure on top, with suites rising up to 55-storeys.

On the ground floor, a double-height atrium will host an upscale restaurant and shopping that leads to commercial/office space topped by Amexon’s 18th-floor Sky Lobby and 30,000 square feet of amenities on two floors.

Jason Shiff, executive sales manager of 488 University, said a unique steel-and-glass exoskeleton will surround the existing building and support the new structure. An outer glass envelope on both upper and lower structures will help blend the two components. Design additions will make the entrance onto the wide sidewalks of University Ave., and on Simcoe St., “pop.”

Prices for the 453 residential suites start at $398,000 for a 544-square-foot, one-bedroom suite with terrace. Units range through, 1+1 (bedroom plus den), two bedroom, 2+1 bedrooms, three bedrooms and 3+1, all with large terraces and panoramic views.

Occupancy is tentatively slated for November 2017.

Inside the tower is TTC access to St. Patrick subway station. A walk away are the shops and restaurants of Spadina Ave., Queen St. W., Yonge St. and the entertainment district. To the south lies the Rogers Centre and Union Station, which is nearing completion of its own expansion project.