January 11, 2015 – Toronto’s University Avenue has a long and dignified history. While Jarvis Street on the east side of the city was the millionaire’s row of the 19th and early 20th centuries, with its enchanting Richardson Romanesque mansions, University was seen as the city’s most ceremonial, though primarily commercial, street: Once lined with chestnut trees from its start at Front Street all the way up to its terminus at (originally) University of Toronto, and by 1899, the Ontario Legislature buildings, it had always been a broad and rather formal promenade. 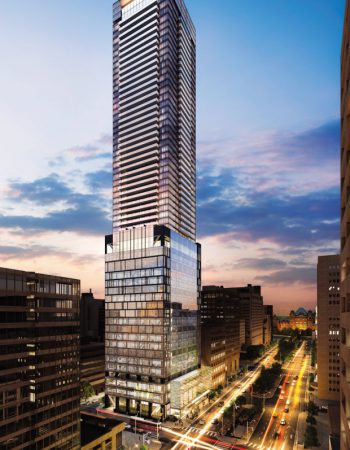 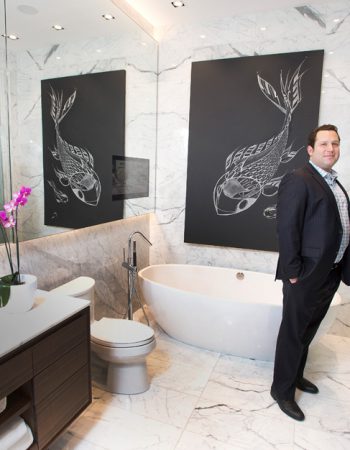 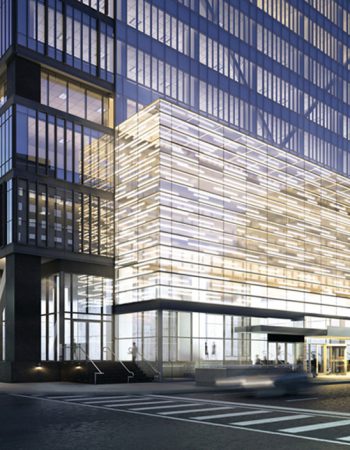 University has long been a thoroughfare, with its straight, unified built form meant for traffic. Insurance companies and office buildings populate its south end, while hospitals line its northern reaches. But it’s hardly an ugly street; in fact, it was and might still be called the city’s most beautiful, divided by a broad central boulevard decorated with landscaping, fountains and war memorials, its vista capped by Queen’s Park. Its urbanity is its greatest asset, comparing honourably with similar streetscapes in major cities around the world. Nice place to visit, as they say, but would you want to live there?

Amexon Developments’ latest project, The Residences at 488 University, indicates that the street may be ready for an increase in residential development. After all, like all of downtown, University’s cultural ethos has changed dramatically in recent years, with the Four Seasons Centre, Shangri-La Hotel and the theatre district all within walking distance. With these have come a growing number of good restaurants and, increasingly, retail. Where not so long ago they pretty much rolled up the sidewalks when the hospital and office workers went home at night, lower University has changed.

Amexon’s resume includes the South Beach Condos and Lofts project in Etobicoke, one of the first in the city to feature six-foot wide balconies, a big hit with buyers when the building was completed in 2009, and copied by other developers since. There, as here, they collaborated with interior design firm II By IV Design, known for its sleek, high-end Modernist design. Core Architects, the authors of progressive residential projects such as Freed Developments’ Fashion House, is handling the architectural design.

While the new tower is being built on top of a circa-1970 Brutalist office building on the site, that building will be completely transformed into part of a slick glass-and-steel skyscraper that will rise 55 floors above the street. At street level, the building will feature a wide, brightly lit podium, where the main level will offer retail, a café and a fine restaurant, adding to the public life of the area.

The unabashed urbanness of 488 University’s surroundings is central to its expected appeal, in the spirit of addresses in such cities as New York and Chicago. It’s a connection the developers have capitalized on, with suite names and marketing designed to evoke the great streets of the world: Park Avenue, Champs Elysées, Broadway (488university.com). But it’s very much a Toronto building: The lower level will connect directly to the St. Patrick subway station, and its clean design fits comfortably with both the traditional and newer buildings surrounding it.

The profile of the building itself feels urban as well. Where it rises out of the existing office tower, the structure steps in, giving it “shoulders,” and a pleasing sense of solidity. On the north and south sides, a little design event in the form of two X shapes break up the gridded expanse of the lower elevation; indeed, oblique lines repeat throughout the building in large and small ways, including herringbone-laid flooring in the suites.

Inside, two communal areas are planned. The vast, 50-foot-high grand lobby at ground level features an inlaid marble floor and pale panelled walls, lit by a row of huge chandeliers, and public areas and suites are finished in elegantly subdued neutrals of grey, white, black and taupe. “The lobby is designed to be quite majestic,” says II By IV principal Dan Menchions. “The design was inspired by New York buildings, both in the materials and the details.” Behind the concierge desk, the diamond/X motif is repeated in a mural inset with white panelling, marble and black glass.

The 18th and 19th floors, where the residential part begins (the lower floors will again be commercial space), offer an enviable array of amenities. SkyLobby is a private lobby for residents, with its own concierge, café and restaurant. Fitness and lifestyle amenities feature a fully equipped and staffed fitness centre, squash and movie-screening studios, indoor and outer pools, yoga and aerobics spaces, a private spa, and steam and sauna rooms. There’s even a private Zen garden. And the terrace on the top of the building offers its own range of comforts such as a firepit and communal seating areas, and a spectacular view in all directions.

The suites take full advantage of the views surrounding the tower as well, with glass curtain walls and II By IV’s disciplined, minimalist design. The kitchens can be outfitted in a dramatic macassar ebony finish; the marble-lined bathrooms, even in the smaller units, are large and luxurious.

With all the changes that the overall influx of residential in lower downtown has wrought, it seems natural that a fashionable residential building like this should come to Toronto’s most formal avenue. The new tower’s podium will add life to this stretch of University, and the addition of non-business attractions such as dining and retail will surely bring in more walking traffic, as well attracting people who work in the buildings nearby. As Mr. Menchions points out: “The building will definitely change the street presence; I think it’s going to become very active.”