January 03, 2012 – Another day, another new hotel that’s opening! We’re loving 2012 already for its existing hotel opening news and we’ve still got an entire year to go!

One of the biggest openings on our hotel stalker radar is The Trump Toronto (now known as the Adelaide Hotel) which opens January 31st. The hotel, which also has residences attached and is now the tallest residential building in Canada (this is Trump after all), was inspired by champagne and caviar which is evidenced in the grey and silver colour palette in the guest-rooms. But there’s much more beneath the bubbly surface here. 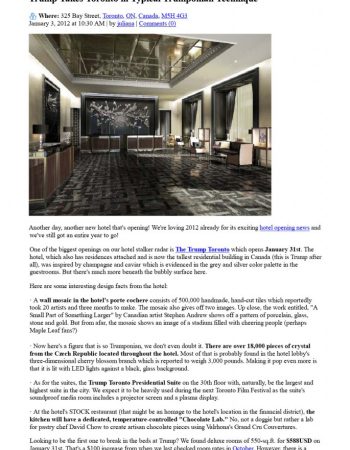